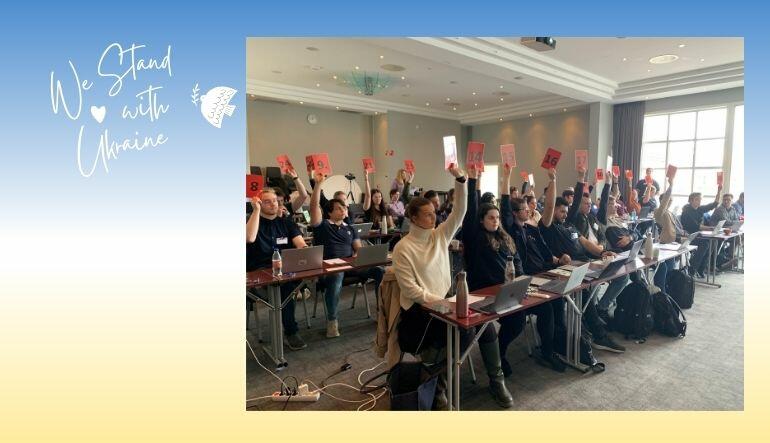 The student democracy passed a resolution about the war in Ukraine.

There was a lot of enthusiasm when a new resolution was discussed. The base for the discussions was NSO’s (Norwegian student organization) resolution which you can read here.

The responsible for learning environment in Kongsberg, Hans Tore Hatlestad Nygaard, brought up that it’s important to be clear on the fact that this is the fault of the Russian regime, and not the Russian people. It is not okay that Russians that are in Norway is treated poorly because of what Putin and his team is doing in Ukraine.

Deputy leader in Drammen, Rose Jahanfarah, was adamant on the point that we need to focus on unity and humanity. Now we have to stand together as students, no matter the country of origin, she said.

Campus leader in Drammen, Edvard Figenschau, wanted USN to make a digital “Norwegian and social study” as an open offer to everyone that is affected by the conflict in Ukraine.

A good debate led to unanimous vote to pass the resolution about the war in Ukraine, which you can read in its whole here:

Resolution about the war in Ukraine

We have gotten reports of Russian students being poorly treated, and that people are being exposed to hate crimes because they talk Russian/Slavic languages. We want to point out that this is the fault of the Russian regime, and not the Russian people. We therefore want to underline how important it is that we all take care of each other in this though period, and that no one should be exposed to hate crimes.

Some of the Ukrainian refugees talk neither Norwegian nor English. USN must make an offer to the applicable students so that they can learn Norwegian and English so that they can study/finish their education at USN. In a rapport to the headmaster from a working group about the crisis in Ukraine there’s been sent in a proposal to expand “Norwegian and social studies” in Bø that will be done digitally. This will be an offer to students affected by the war in Ukraine. The student democracy supports this proposal and wants USN to create this offer so that the refugees will have the possibility to learn Norwegian and study in Norway.